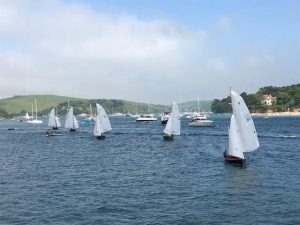 For the second bank holiday weekend in a row Salcombe was drenched in sunshine and sailors in the Coast and Country Yawl Open Meeting enjoyed three days of competitive, if sometimes frustrating, racing in the Estuary. Easterly winds dominated on Saturday and Monday but on Sunday the sea breeze effect swung the wind direction further south, resulting in some light and fluky transition zones in classic Salcombe fashion.

A healthy fleet of fourteen Red Fleet (modern) Salcombe Yawls took part with many thanks to the wonders of orthopaedic and cardiovascular surgery.

In the first race, around the creeks, Graham and Tessa Pike lead off the start line and built up a healthy lead as the chasing pack scrummaged for the minor positions which were resolved as the fleet rounded Halwell point, where Will Henderson and Jim Stone took the low and wide route to move into second with David Greening and Stephen Galvin in third.

In the second race a long light wind beat out to the entrance of the harbour saw Richard Fulford-Smith and Molly Pike round the windward mark in the lead and fair winds allowed them to pull away from the pack into an unassailable lead on the journey back through the harbour to Gerston. For the rest of the fleet there was a tussle over the final metres, with a dying breeze and a spring flood tide seeing Will Henderson record second place from Rob Adams and Ian McCormick.

Shortly before the start of the third race, the wind backed from South Easterly to Easterly, leading to a late change of course to Gerston, however the interest was mainly centred on a comedy rounding of the Blackstone mark, which was standing in an increasing flood tide, and a variable light breeze; Simon Gibbens and Andrew Reed managed the rounding from the Salcombe side, but Rob Henderson and Tristan Stone and Malcolm Squire and Jonathan Britten came through the fleet from the Portlemouth side to take the remaining podium spots.

Monday’s race officer Tim Law wisely chose to contain the fleet in the harbour, where the North Easterly wind was strongest. Squire and Britten, the overnight leaders, needed to win this race and also ensure that Henderson and Stone (seniors) did not finish second. Squire and Britten delivered first place, and an uncharacteristic error by Henderson when he tacked at Blackstone almost gave Squire and Britten the weekend, however wily Will worked down the middle of the harbour using the shifts and pressure to secure his third second place which was sufficient to win the Open Meeting. There were four different race winners over the weekend, and the overall champion did not win any races, a testament of how evenly matched and competitive this fleet is.

There were also fourteen entries in the Classic, or blue, Fleet. Andrew Wood and Tim Petit began the weekend with a victory in the windier first race but in Sunday’s lighter conditions they did not get the rub of the green in some of the light and variable stuff and saw good positions slip away from them. John Smithers, sailing with Alicia Bennett, proved master of the lighter conditions, recording a first and a second place to move into the overall lead going into the final day. A win for Mike Knowles and Mandy Henderson in the last race would still have secured them the title but in the event Wood and Petit rediscovered their form in the fresher conditions on Monday and sailed away to victory. This gave them second place overall behind Smithers and Bennett with Knowles and Henderson a point further back in third.
© Rob Hyde

Late May Open
Tagged on: salcombe