The fleeting of Yawls in Open Meetings and Regattas has constantly changed over the years as the numbers of competing Yawls change. Future Race Organisers must have the freedom to organise the racing as they think appropriate.

A list of Salcombe Yawls post Y141, but not of Morrison or Howlett design, has been prepared however this does not define the fleet in which the boats will sail in the future.

We know which the Stone boats are, there are the odd boats numbered from 140 out there whose provenance are not known:- 142,144,146,147 and 149. None of them are raced at present, but hopefully someone out there will know what shape they are.

If any one has a concern they should contact the SYOA.

This is an open forum so please post your comments.

Dan Bridger said that a definitive list was required.

Julian Murch (Y71) suggested using the website for a full discussion of the issue.

Dan said that the members present at the AGM gave authority for a list to be drawn up of post 141 boats eligible to be allowed to sail in the Blue fleet. This list will be published on the website for discussion within the membership. Fleeting in Regatta was discussed and it was agreed that future committees together with the Yacht Club race management must not be denied flexibility as numbers of entrants grow or diminish. Jock suggested that the list be subject to annual review.
It was decided that careful wording was needed to accompany the finalised list.
“Subject to review as and when necessary due to Regatta entrant numbers”, was decided upon.
The list of Stone built post 141 Yawls comprises :- Y143 Y150 Y152 Y155 and Y161
Y142 would be included in the list because it was built pre Y141.
Dan thought that Yawls 144 and 146 built by Mike Atfield may also qualify. The secretary cautioned that considerable work had been done on Y146 fairly recently because the original hull didn’t measure.
Action Mike Atfield to be contacted about the design of these Yawls before including them –or not- in the list. John Donovan may also need to be involved. The list then to be published as agreed above.

When Jon Alsop owned and sailed yawl 69 which he had quite a bit of success with, he decided that he wanted to have a new yawl built, he came to me with some drawn out sections which he and one of his close friends who was a top notch Merlin Rocket sailor had been working on.

I explained that I would have to draw out the lines full size and fair in all the stations to make sure the new shape would measure, it was quite radical at the time with a very flat run from midships back to the transom and the transom flared out from the bilge to the gunwale, after some slight modifications we came up with a set of lines which would measure and built the yawl which became Y 144 Cormorant which Jon sailed and had considerable success with, he sailed her from 1989 to 1995 when he teamed up with Jeremy Hobbs and I built Y160 Bluebird which Jon sailed right up to the end.

Yawl 149 was never built, the reason being, I was building a Morrison designed yawl for a Mr Richard Hughes, Alec Stone was at the same time building a new yawl for his own use, Richard Hughes was watching the racing and noticed that Alec was sailing his new yawl Y150 L’Eagle, he flatly refused to have the number 149 on his new yawl because he argued that yawl 150 was already launched and sailing and he insisted on having number 151, because his argument was that Alec’s new boat should have been number 149 as it was completed prior to his new one, it was not quite as simple as I have portrayed it, there was a lot of political intrigue involved, even in 1991! So that is why yawl 149 does not exist.

I hope the above is of use to you, Kind regards, Mike

Regarding Yawl 146, I have just been talking to Jim Stone, it says in your email that when Y146 was mentioned the secretary “advised caution because considerable work had been done fairly recently because the original hull did not measure”, basically all that was done was to fit a fashion piece inside the coaming at the after ends so that the side deck width was increased by 12mm at the corner where it meets the aft coaming.

From Scratch Taken from 2010 News Letter. 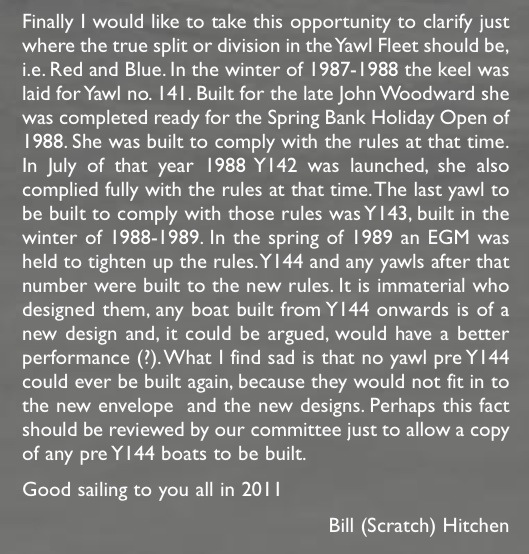